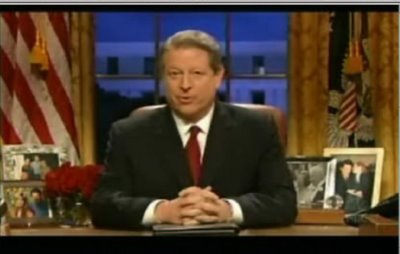 Sure, he sounds great now, when his political career is over. If he had been elected, undoubtedly we would be better off, without having invaded Iraq, without secret NSA surveillance, but I'm sure we would have a lot more to complain about. Like, for example, how does a supposed liberal oppose national health care, support the death penalty, support the Cuban embargo, support Iraq sanctions, support NAFTA, and oppose gay marriage [link,link]. That was Gore, back when he was still a politician. Of course, I can't help but wish that we had today's Al Gore as president.

I thought he was hilarious on SNL. Glad I voted for him.

What makes anyone think that a new guy shuffling the deck chairs will change anything is beyond ken.

I wish. I really realy wish.

it was so close. and impossibly far. what a loss for the world.