Dancing all night with military dictators 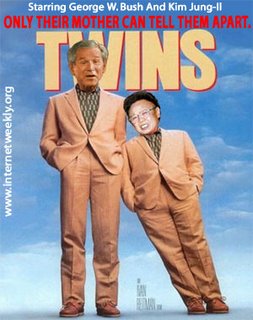 Washington, May 17 (The New York Times) - President Bush's top advisers have recommended a broad new approach to dealing with North Korea that would include beginning negotiations on a peace treaty, even while efforts to dismantle the country's nuclear program are still under way, senior administration officials and Asian diplomats say.

The lesson for other countries that want to restore their relations with Washington is clear. Become a military dictatorship. Eliminate every single trace of democracy from your society and politics. And... Voila! Washington's suitors will come a-courting to your doorstep before you know it.

Here's my question: What gives the U.S. the right to tell another country they can't have nuclear weapons?
The U.S. has them and no one has tried to regulate us. It's find it hypocritical when one sovereign nation tells another how to run it's country and what it can and cannot have.
I'm not sticking up for KIm Jung-IL and I'm certainly not in favor of any nation posessing arms, but bullying another country into disarming is basically a war waiting to happen. The best way to change N. Korea is through business and trade which in turn leads to trade on ideas, theories, and the image that N. Koreans have about Americans and the rest of the world. Just my thoughts though.

North Korea wants to have its cake and eat it to. They want other countries to continue to "help" them with their energy issues (and other issues as well), while still wanting to become a bully with nuclear weapons.