The full text of President Ahmadinejad's letter to President Bush, as published in Le Monde (in English): Letter from Mahmoud Ahmadinejad to George W. Bush

According to reports, Bush has been "briefed" on the content of the letter. In other words, he will not (be allowed to) read it. I think it is important that as many other people as possible do read it, both because of the alternative perspective that it presents, and also because the "news" media have already told a lot of lies about what it says. 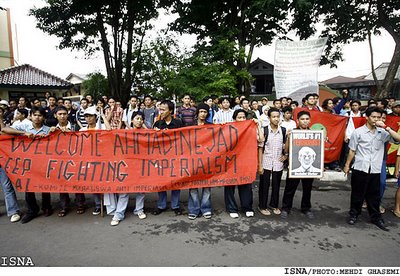 President Ahmadinejad welcomed to Indonesia during his current visit

Unfortunately, much like the result of others who have questioned the prospects and actions of this government, Ahmadinejad's letter will fall upon deaf ears.

However, as stated, a successful alternative would come from the fact that as many people as possible get their hands on this and spend some time to understand it. And, more importantly, pose questions for themselves.

I really liked approximately the first 75% of the letter, except for the holocaust denial part. Then the last 25% is where he loses me. I agree that Western-style democracy has failed, but a theocracy is probably the opposite of what we need.

I was most struck by the fact that he didn't come out and blatantly say that his nuclear ambitions are strictly for peaceful purposes. A western leader would have said that weather it was true or not. He hinted and alluded to it, but in an indirect way, talking about the lies leading up to the invasion of Iraq, etc. I think that he wants the US to believe that he does have a nuclear bomb, because the only way that he can be sure that we can't invade is to follow North Korea's example, and get the bomb as fast as he can.

He introduced himself to the people of the world and showed them that he is not a fascist dictator as he was portrayed in the Western media. Now compare him with Bush and all those warmongers in his cabinet. Compare him with the US lackeys in the Middle-East. He definitely does not sound like a dangerous madman. As a matter of fact he sounds completely rational; someone who tries to have a *real* dialogue among civilizations; not like the one by his predecessor which was all flash and no substance.

I read the letter and found it very interesting. I agreed with quite a lot of it. Not the religious aspects of it though. Mahmoud Ahmadinejad makes some very good points, and there is a very interesting section on Israel.
Unfortunately a lot of people won't take a few minutes to read this and they'll get a distorted out of context view of it from the American News Media.

"The best lies must always have plenty of true and verifiable facts to lull the victim."
This sentence was uttered many years ago by a con artist. I've always kept it in mind, as a warning.
Most of this letter's content is righteous under both a religious analysis and common sense.
There is no doubt this letter seems like an honest attempt towards peace.
But there is another sentence flashing in the back of my mind: “when words and acts don’t agree, it is the acts we should consider”.
The speech in Indonesia should be a warning, the refuse to admit the existence of an Israeli state does not agree with this letter, that speech inflamed with hatred the hearts of thousands of Muslims.
In my humble opinion neither the war mongers who press the US to war nor the Iranian president are to be trusted.
Now, more than ever before should the UN act up to the hopes it was created in the first place: unite the nations to prevent any more world wars.