Unprecedented levels of cruelty, even by Israeli standards 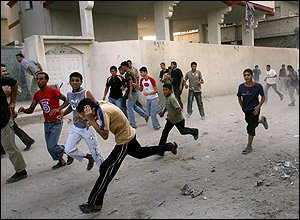 Palestinians run for cover as Israeli troops open fire near Beit Lahiya
Below is a statement/petition on the current situation in Palestine being circulated by Britain's Palestine Solidarity Campaign. It is currently being forwarded to British public figures, organizations, trade unions and others who are asked to sign it. The British Palestine Solidarity Campaign has asked sympathizers in other countries to undertake similar initiatives in their own countries. The British initiative has already received considerable support. Here is the text of the British statement:
Emergency in Palestine
The Israeli government's behavior at present is to be comdemned. The failure of our government to speak out against Israel's oppression of the Palestinian population is complicit with those actions of the European Union, the United States and Israel. It is in effect a coordinated attempt to collectively punish the Palestinian people for electing a government of which they disapprove .

Having lectured the people of the Middle East about `democracy' for decades, our government, the EU and the United States are seeking to trample upon the right of the Palestinian people to exercise their democratic right to elect their own government.

The suspension of aid by the EU and the US, the withholding of Palestinian taxes by Israel, and Israel's illegal blockade, are crimes against the Palestinian people.

They are creating a humanitarian catastrophe in Gaza and the West Bank and have emboldened Israel to sustain an unrelenting bomb and missile barrage , which regularly kills innocent children and other noncombatants in violation of the Fourth Geneva Convention which protects civilians under occupation.

Israel has bombed the only power station in Gaza , destroying electricity and water supplies to hundreds of thousands of Palestinians, and forcing tens of thousands to flee from their homes. These are crimes against humanity.

These actions have now culminated in the kidnapping by Israel of a quarter of the parliament elected by the Palestinians, and half of its democratically elected government. They join thousands of other Palestinians illegally kidnapped or imprisoned by Israel, including over 300 children.

We call upon the British government:

1. To immediately work for the restoration of EU aid to the Palestinian Authority.
2. To demand that Israel ends its blockade and restore taxes to the Palestinian Authority.
3. To demand that Israel cease all military action in the Occupied Territories.
4. To demand the release of all elected Palestinian officials held by Israel and the instigation of a programme for the release of all prisoners held in violation of international law.5. To apply pressure through the United Nations for Israel to respect the UN resolutions requiring its withdrawal from the territories it illegally occupied in 1967.
6. To end Britain's arms trade with Israel until it abides by international law.

The statement by the British group Palestine Solidarity Campaign has so far garnered the signatures of the following public figures:

israel sucks, just like bush and republicans...and wal-mart too