No words can describe the suffering of Palestinians 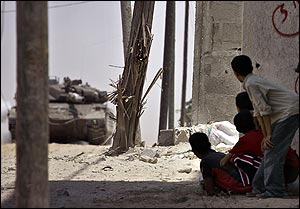 Palestinian children take cover as Israeli tank advances
"Collective punishment is illegitimate and it does not have a smidgeon of intelligence. Where will the inhabitants of Beit Hanun run? With typical hardheartedness the military reporters say they were not "expelled" but that it was "recommended" they leave, for the benefit, of course, of those running for their lives. And what will this inhumane step lead to? Support for the Israeli government? Their enlistment as informants and collaborators for the Shin Bet? Can the miserable farmers of Beit Hanun and Beit Lahia do anything about the Qassam rocket-launching cells? Will bombing an already destroyed airport do anything to free the soldier or was it just to decorate the headlines?

"Did anyone think about what would have happened if Syrian planes had managed to down one of the Israeli planes that brazenly buzzed their president's palace? Would we have declared war on Syria? Another "legitimate war"? Will the blackout of Gaza bring down the Hamas government or cause the population to rally around it? And even if the Hamas government falls, as Washington wants, what will happen on the day after? These are questions for which nobody has any real answers. As usual here: Quiet, we're shooting. But this time we are not only shooting. We are bombing and shelling, darkening and destroying, imposing a siege and kidnapping like the worst of terrorists and nobody breaks the silence to ask, what the hell for, and according to what right?"