As part of Israel's psychological warfare operations, its planes have dropped leaflets over Beirut with a crude drawing of Sheikh Nasrallah depicted as a cobra dancing to the tune of the leaders of Iran, Syria and Hamas.

The tactic would have been hilarious in a less tragic situation. With the major Arab governments having formally abandoned Lebanon to Israel's clutches, Lebanon's only remaining friends consist of... you guessed it: Iran, Syria and Hamas. 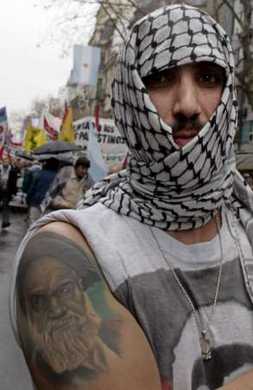 A member of Argentina's Arab community shows a tattoo of Iran's late leader Ayatollah Ruhollah Khomeini during a protest rally in Buenos Aires against the Israeli attacks on Lebanon
Posted by Al S. E. at 9:54 a.m.

Hello,
How refreshing to find such a compelling and intelligent blog! I just started mine so I don't know much about them but this one is very interesting. The arguments are there. How soon before the American public starts paying attention? I don't like this president. He's made such a mess of things.