From mice to men (and women)

According to a UPI report today:

Egypt's al-Gomhuriya [newspaper] commented the Palestinian cause has historically been instrumental in uniting Arab ranks in the struggle to liberate the Palestinians and Jerusalem from Israeli occupation. The semi-official daily said it was now time to once again reunite to save the Palestinians from the "daily massacres carried out in their ugliest forms before the eyes of the silent world that has been preoccupied with the personal American agenda." The mass-circulation daily's editorial warned that waiting for an American intervention to stop the "Israeli massacre against the Palestinian people" is "delusional due to the agreement between Washington and Tel Aviv's policies and objectives." This requires an immediate meeting of Arab leaders, it said, to work seriously to "use what elements of power and pressure cards they have left, not only to save Palestine, but to rejuvenate the diseased Arab body."

We will have to wait and see whether al-Gomhuriya's prescription for action by Arab governments will be put to practice. In the past, Arab governments have tended to act more like mice than men. (That was what Robert Fisk called Arabs a few years ago in a moment of anger at their apathy or inaction in the face of Israeli atrocities)

For the moment, Palestinian guerrillas have certainly been nothing less than lions (and lionesses). The capture of the two Israeli soldiers in Lebanon by the Hezbollah has not only helped strengthen the solidarity and resolve of the Palestinian nation, but it may help put pressure on Arab governments to take some real action against Israel. Israel thought it could wreak whatever havoc it wished on the boxed-in Gaza strip, on the pretext of freeing one soldier. With the capture of two Israeli soldiers in Lebanon and their removal to unknown distant locations, making it impossible to find them no matter how many bombs Israel drops on defencelesss Palestinian and Lebanese civilians, the pointless violence of the Israeli State will become clearer than ever for everyone to see. 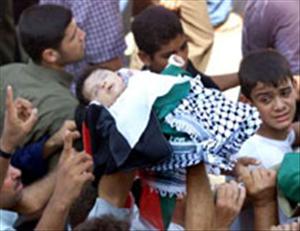 It’s so easy for me to sit here in front of my computer and in my comfy chair and comment about a war far from where I live. But I’m going to do it anyway!
What’s the use of having an army if nobody wants to use it? What’s the use of billions of dollars that Arab governments use to buy the most sophisticated weaponry? Just to suppress their own people? Some people blame Hezbollah for starting this war. For how long will the Arab nations sit around and watch their Arab brothers and sisters butchered by the Zionist regime? How many lives should be destroyed before they wake up? Hezbollah for whatever reason decided to put an end to this B.S. and I don't care what the reason is, we should all applaud them and support them for their bravery.
What Robert Fisk said about Arabs does not seem to be valid in this case. We have Arab men and women who put their lives on the line to fight this cancerous tumor. Enough is enough.

I pity Arabs not unifying against those zionists. Vietnam, then Iraq.. "split and conquest" once again is being used, syrians were kicked out so Israelis take over for a lousy reason Mr. G.W. accuses HizboAllah being terrorist. Let Israeli armies that are supplied with American ammunition to commit genocide against them. They must've forgot that there's a God watching!!!