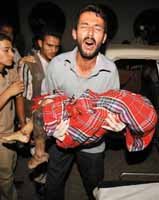 A Palestinian carries the body of Rowan Hajaj, a six-year-old girl, to a hospital in Gaza City. The girl, her elder brother and mother were killed during an Israeli raid on a house.
An article in today's Toronto Star by Simon J. Black, a Toronto freelance writer:

I know Gilad Shalit. Not personally, but I could tell you what he looks like, his age, where he went to school, his hometown, his father's name, what his father looks like, and how he weeps for his son.

I know that this is not the first time that the Shalit family has felt the emotional impact of armed conflict. I know that during the Arab-Israeli war, Gilad's uncle, Yoel, was killed.

I know that Gilad is the first Israeli soldier captured by Palestinians since 1994. I know Gilad's friends describe him as a peaceful and quiet young man.

I know that Israeli Prime Minister Ehud Olmert has spoken with Gilad's father. I know that Olmert has assured Galid's father that everything in his power is being done to secure the release of his son.

I also know that the "everything" Prime Minister Olmert speaks of includes the collective punishment of the Palestinian people by further military incursions into their territory, destroying Palestinian infrastructure and cutting their power supply, leaving families in the dark.

I know these things because I watch the nightly news and read the daily paper. Since his capture, I have been unable to avoid the image of Gilad Shalit and the life and history behind this image.

What I do not know is the names and faces of the hundreds of Palestinian children held in Israeli jails.

I could not tell you about their brother or sister, whether they would like to go to university, or whether they have a dead relative for whom they were named after.

Nor could I tell you about the thousands of Palestinian men and women who are held by the Israeli state without charge or trial. I could not tell you whether their friends and family describe them as peaceful or quiet.

These people are nameless, faceless, reduced to bare life — human beings not entitled to rights, dignity and respect.

Nor do they merit the attention of the BBC, The Globe and Mail, Ha'aretz, or The New York Times.

Unless of course they engage in an act of violence so horrific, so apparently unexplainable and incomprehensible that they must be subject to biography, psychological profiling, a where-did-it-all-go-wrong-for-the-aspiring-fun-loving-university-student-type docudrama.

Apparently their suffering does not deserve the attention of the media.

Their incarceration is not the stuff of headlines in the national media. Their detainment is without explanation and justification in the op-ed section of the dailies or subject to the analysis of talking heads on the evening news.

No ink will be spilled over their life stories.

We only know Gilad Shalit. 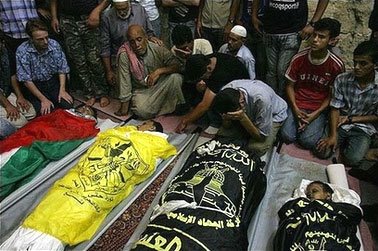 Fifty Palestinians killed to save one Israeli soldier, and yet Israel claims it has not used excessive force. What, in God's name, would be "excessive" force?
Posted by Al S. E. at 6:54 p.m.

Simon J. Black is definitely not the first to ask why the media choose to report on certain aspects of a story and not others – why they often make available only one point of view. He is not the first to allude to the media being responsible, in part, for unbridled ignorance and the misinformation epidemic that plagues our society. Nor is he the first to implicitly suggest that tragedy is a result of the media’s misguided priorities.

While Black’s concerns are certainly legitimate, it is important to remember that “BBC, The Globe and Mail, Ha'aretz, [and] The New York Times” are not the only media available. A quick online search will reveal countless pages (news media and otherwise) that provide a plethora of information on those whom Black is so quick to refer to as “nameless, faceless, reduced to bare life — human beings not entitled to rights, dignity and respect.” This information is provided in a number of different languages, from a number of different perspectives.

The real problem is not the media at all. It’s the people who rely on the media with which they are familiar to provide information. There can be no doubt that the mainstream media is, and perhaps always has been, greatly influenced by interests other than presenting an unbiased and multifaceted story. The tragedy is not that the media has failed the Palestinian people, but instead that the majority are unaware of their own ignorance, or aware but content nonetheless.

this explains why americans are ignorant of what is really happening. government and media propaganda.