"Palestinian lives are nothing, Israeli lives everything" 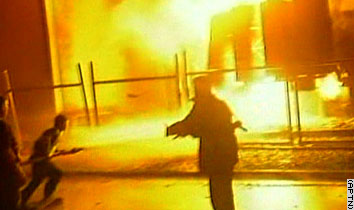 From a letter by a Naftali Lavie in today's Toronto Star:

"As someone who has served in an Israeli tank unit near Kerem Shalom, I have nothing but sympathy for the bereaved families of Lieut. Hanan Barak and Sgt. Pavel Slutsker, killed in a daring Palestinian commando raid in which Corp. Gilad Shalit was taken captive. But some perspective and some context are necessary.

"This tank base was one of the locations from which Israel has been relentlessly shelling the Gaza Strip for several weeks. Further, just one day earlier, on Saturday, Israeli commandos had raided Rafah, in the Gaza Strip, and captured two brothers, Mustafa and Osama Mu'ammar. All of this is well-known, but did not make it to the front page. Can it be that Palestinian lives are nothing, Israeli lives everything?"

I am in a state far beyond anger and indignation. I think I can best describe it as emotional paralysis. Israeli monsters inflict whatever horrific suffering on the completely defenceless Palestinians that they feel like -- with complete impunity, without anyone, least of all the emasculated Arab governments, raising so much as a peep.
Posted by Al S. E. at 11:04 p.m.

So much of the conflict is about double standards. Israel takes thousands of Palestinian prisoners, but the Palestinians take one Israeli solder, and Israel invades, refusing to even negociate. Hamas is elected, Israel refuses to recognize their soverenty unless they renounce violence and recognize Israel's right to exist, but could you imagine Israel being held to the same standard, renouncing violence and recognizing the Palestinian's right to exist?

Atrocities are committed all the time by both sides, yet for some reason, only the Palestinians are considered terrorists.

Great post, Thank you for supporting the Palestinian case. You are a great person. Thank you so much.

"I think I can best describe it as emotional paralysis"
I can so relate!!! agape,awestruck so very dismayed and the end of the day- so unbelievable.
It is at these times I think humanity must relinquish its position on top of the food chain and give the roaches a go. It could only be better.

The situation is both sad and pathetic. What are their Arab brothers doing for them? For how long are they going to sit around and tolerate these pathetic client regimes in the region? Why Iran is the only government in the region (and the world for that matter) that condemns these atrocities? And I'm not talking about "voicing concerns", like what our little kinglet of Jordan is doing. Israel has got a license to kill and it’s just upped the ante. Today we heard they’ve bombed out the Palestinian’s PM office. What else is there left to bomb? And all this for a captured mercenary/soldier? Give me a break!

This tumor must be destroyed. And if takes “wiping it off the map,” so be it.

The transparent motive behind Israel's actions is to force the Hamas government to crumble. Is this motive sponsored and implicitly encouraged by the United States and Fatah? Maybe. It is very apparent that Hamas is seemingly not going to be accepted as a legitimate movement - due to its past ties to terrorism; the "abduction" of a single Israeli soldier was the excuse the needed to act on a plan to bring Hamas down. There was no concern for proportionality - because the die was cast once Hamas rose as the top party in the Palestinian state. Israel's refusal to negotiate with a Hamas-led Palestinian government is irresponsible and patently driven by ideological interests. Its actions has led the region, once again, into deep crisis.

Is it a vicious cycle?