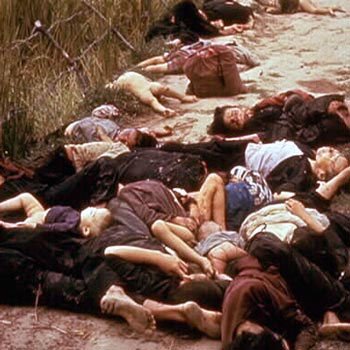 The American Massacre at My Lai, Vietnam, 1968 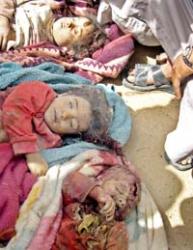 The American Massacre at Haditha, Iraq, 2006

In case you have been wondering whether anyone will be punished for the Haditha massacre (and the other massacres in Iraq), I would remind you that out of the 26 military personnel originally charged for the far larger massacre at My Lai, only one man, Lt. William Calley, was ever "punished." His punishment? Three and a half years of house arrest!

That pic with that caption - kudos.

I wonder if Donny Boy would be grinning like a pig if his babies had been murdered. This is not a game.

My Lai was pretty damn bad. So bad that a Huey chopter unit witnessing the massacre landed between some villagers and U.S. forces to preven them from being slaughtered. The Huey captain said something to the effect of "Take one more goddamn step towards those villagers and my crew and I will open up on you with that Huey's machine gun!" You know you ot to be out of line whenever your own jarheads tell you to cool it.

What You Don't Know Wont Hurt Him said...