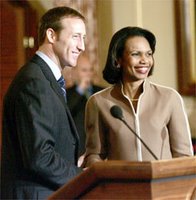 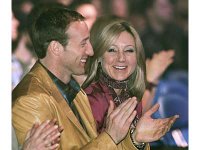 "[Canadian] Foreign Affairs Minister Peter MacKay spoke of a mysterious 'chemistry' with Condoleezza Rice, invited her for a skate on the Rideau Canal and gushed his longtime admiration from the podium as the secretary of state fixed her gaze on some point on a distant wall." (From today's Toronto Star)

The Star's catoonists are probably working on an appropriate cartoon right now, with a bit part played by Belinda Stronach. What about calling him "Canada's Minister of Affairs"?
Posted by Al S. E. at 4:11 p.m.

You may or may not know but rumour has it that the reason secretary Rice is so much against Iran is that during her college years, an Iranian boyfriend dumped her and broke her heart. Let's hope this new found "chemistry" does not lead to animosity between the two neighbouring countries.

You have a wonderful blog. I always enjoy reading your posts and this has been no exception. Keep up the good work.

Do you reckon there'll be wedding bels soon?

How did you get the IMPEACH BUSH! Thing? It's rad!

Hi Sweet! Click on the Impeach Bush banner, and it will take you to the site. There, you can either just pick up the banner, or become a full-fledged member of the site as well. To install the banner, place the HTML code at the top of your blog's template.

Thanks for your comment, Rich of Spirit. Currently, my main concern is that the idiots/loonies who run the US Government might incline more towards the loony side of their personalities and attack Iran. Any insights you might have on this (or any other subject) from within the belly of the leviathan would be appreciated.

why should americans impeach BUSH? after all he is doing this to bring drums full of oil to US!! [Right now the American pressure is on India- an oil pipeline project form Iran to India through Pakisthan is in the pipeline. they offer all the goodies to india so that they will drop this project. and stupid indian polititians have just taken the bait hook line and sinker.

Yes, it is one thing to write about impeaching Bush, but the real question is, how do you modivate people to get up out of their chair and actually do it?