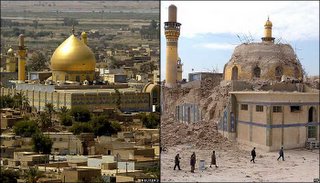 Did Israel plan and carry out the bombing of the Askari (Al-Askariya) Mosque in the city of Samarra, possibly through local agents in Iraq? The bombing was reminiscent of the destruction wrought in 1984 on Sikhism's holiest shrine, the Golden Temple, in the city of Amritsar by orders from Indira Gandhi (who paid for it with her life less than five months later).

Yes, I know, the appearances are different. Amritsar's Golden Temple was destroyed by regular (foreign/Indian occupation) armed forces, whereas the Askari Mosque has been destroyed by "terrorists." Yet, who are these "terrorists"?

I think a strong circumstantial case can be constructed for Israeli involvement in the bombing of the Askari Mosque.

I would rule out Al Qaeda involvement. Contrary to the White House generated propaganda that has been pounded into people's brains for the last five years, Al Qaeda's targets are not selected at random. Rather, they have included two types of targets, and only two types: (1) American interests, and (2) what I would call "American mercenaries." By "American mercenaries" I mean anyone who works for US interests, whether directly or indirectly. This includes, for instance, all collaborators in Iraq, such as Iraqi police forces and their recruits, Iraqi armed forces and their recruits, and so on, not to speak of members of the Iraqi "government."

Also, I don't see what benefit could accrue to Al Qaeda from increasing the level of tension between Sunnis and Shias. And I think Iraqi Sunnis, or Sunnis from any other country, were most likely not the perpetrators of this event. Sunnis would know that this type of event would bring down the wrath of the now-powerful majority Shias down on their heads, as it already has. They have little to gain from committing this type of atrocity. Not to speak of the fact that the Shia Imams buried in that mosque are, as close descendants of the Prophet, revered almost as much by Sunnis as they are by Shias.

I cannot imagine any Iraqi (or indeed any Moslem), no matter how fanatically devoted to the Sunni cause, destroying one of Iraq's age-old symbols of pride and nationhood. And, despite my views on the United States government, I cannot imagine Americans perpetrating an atrocity of historical proportions such as this.

Zionist agents are the only group depraved enough, vile enough, and immoral enough to plan and carry out such an inconceivable horror. The Zionist plan may have been to turn Moslems against each other at the very moment when the whole world is beginning to see through the Zionist mythology that for so long has upheld the State of Israel. Their ultimate end, which to them justifies any means whatsoever, is to perpetuate the Zionist cancer in the middle of the Moslem world.

If Moslems do manage to see through this plot, the immense outrage that is bound to be generated by the destruction of the Askari Mosque, rather than dividing them, may play a part in uniting Moslems against their common enemies, and turn dreams of "wiping out" the State of Israel, this root of all evil in the world, into reality.

• My other posts on related topics:
Myth and Myth-take (with Update)
New Age Zionists
Unity, progress, and purpose
The Poodle's UNcle
What do you care?
Boundless Arrogance II
"Democracy in Action"
Posted by Al S. E. at 1:41 p.m.

Ah, Al, I do not believe that Regular Indian Army forces would have been "foreign".

They were essentially carrying out an internal India "anti-terrorist" action ordered by Indira Ghandi.

Was it the Zionists? Really? That seems to me like stretching conspiracy just a bit too far...

AlQaeda? Possible. The motive? To increase tension between Sunni and Shi'a - they see the Sunni as "Saddam secularists".

In the meltdown that is Bush's Iraq who can say?

As to your point about India, I think of Punjab as occupied Khalistan. It may be legally and forcibly a part of India, but that is irrelevant.

That has been bugging me since I saw that golden dome blown off. I just cannot believe that Iraqi, Sunni or not, did that. I few months back, someone speculated that the only way we could get out of Iraq and save face was to invoke a civil war. And, as you see, some die hard war supporters have been pulling the "these people are too crazy" to try to help. You see Great Britain and the U.S. telling Iraq that if the sectarian violence, they will not continue to support the efforts to assist the country. John Negroponte, who some say oversaw death squads in Honduras, is the Ambassador to Iraq ... and what shows up suddenly? Death squads.

I don't know if it was Israel, America or some other outside party with a vested interest but something just isn't right about this and I'm not sure the Iraqis are behind it. Only an out of control civil war would give us an out where we could use the excuse that our troops were in too much danger.

Well, we know the UK's been running false flag terror operations in Iraq and Iran. link

We can assume the Americans are doing the same, and although I don't have the links, I know Israel ran a lot of pre-invasion 'sabotage' etc, and we know Israeli units are operating in Iraq, mainly 'embedded' with US troops.

So very likely one of the three did this.

It is hard to see it being in the interests of any Iraqi, or perhaps even any Muslim.