On the basis of my search, coverage of the following Reuters item has been limited to only two newspapers in the world, one in Kuwait, and the other one in India. The Reuters report is here:

US churches apologize over Iraq war

No reports of the apology have appeared either in the US or in Canada... And they dare criticize censorship in China.

To their credit, the US media (and media in many other countries) have widely reported the following Associated Press news item:

The US reportage is all the more creditable (and incredible) as, in Canada, by contrast, the news item was carried only by The Ottawa Citizen (unless one wants to count a local paper called The Pierceland Herald that I had not previously heard of, which also published the story).

While the United States government and the EU are in the process of suspending the measly aid they have been providing to Palestinians, and Israel is stealing the taxes it has collected from Palestinians, people of conscience are debating divestment in Israel. 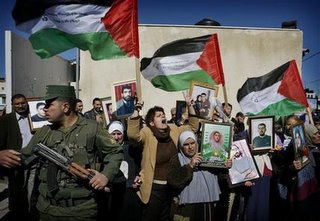 I am at a loss to explain the lack of coverage in Canada because, for one thing, Canada was at the forefront of the anti-apartheid divestment efforts. Perhaps a few relations and equations of power and influence have since then undergone some radical changes in this country. Not to mention direct pressure exerted by foreign governments and their local agents and lobbyists.

The latest interesting twist in the divestment issue, published by a single source only:

• My other posts on related topics:
Truth as a higher degree of deception
Intolerance masquerades as tolerance
Myth and Myth-take (with Update)
New Age Zionists
Unity, progress, and purpose
The Poodle's UNcle
What do you care?
Boundless Arrogance II
Posted by Al S. E. at 6:17 p.m.

So let me get this straight. You disinvest in a bulldozer company and that will make you an anti-Semite?