I am not one of those people who turn into instant experts on a foreign country after a short visit there. Far from it, and in more ways than one. First, I think understanding a country requires spending a significant portion of one’s life in that country. Second, as I’ll explain, I think understanding Cuba is doubly difficult, because everything about it seems contradictory. In any case, I don’t intend to write a travelog. That is not the sort of thing this blog is about. I'll limit myself to some general comments about some observations that left a deep (and therefore possibly true) impression on me.

Imagine a city with over two million people, hardly any traffic signs or signals and only a handful of marked street names, whose traffic moves in a more orderly fashion than that of a city of similar size in an “advanced” country, say, Toronto.

That is the kind of place Cuba is. Its character is self-contradictory and inexplicable. That is, I think, all the more reason to try to understand it, because I believe its contradictions are the secret of its survival. Cuba did not just happen. I believe the Cuban Revolution happened in Cuba exactly because Cuba is what it is. It is a land where contradictory qualities can be successfully combined, where hope can be combined with despair. We would ordinarily claim such a blend is impossible. But that is only because of our own class prejudices. We are far too comfortable. We think life is about either having a lot of things or not having quite so many things. Life’s circumstances have never forced us to endure real contradictions. We, the so-called progressives, cannot begin to understand human emancipation until we try to rid ourselves of such deeply-ingrained class prejudices. 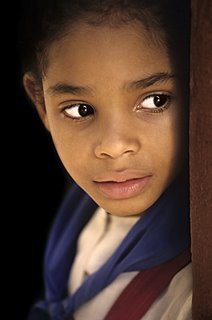 There is an impossible quality in the Cuban people’s gaze. You find it in old Cuban paintings, as well as in living Cuban eyes. It combines deep melancholy with high hope. I think the Cuban Revolution could only have happened and survived in Cuba, because its people’s character enabled them to endure the incredible suffering that the Empire has imposed on them, so as to hold on to their dignity and hopes for a better future.
Posted by Al S. E. at 7:05 p.m.

Thanks for sharing these pithy observations.

I think your short visit has provided you some insight. Your comments reminded me of some I heard in discussions with a friend who took his family from Florida to Havana on a sailboat.
It's sad to think that trying to rid oneself of ingrained class prejudices can bring criticisms from those who are quick to denigrate people living in non-democratic countries.