Stephen Harper is forming a minority Conservative government in Canada, and I am leaving the country!

Those two things aren't actually related to each other, though. I am off to Cuba for a week of R&R and maybe a slightly improved understanding of that country. I hope to have something interesting to report when I get back to the Frozen North. 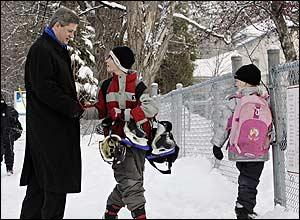 When I saw this picture, I assumed it was from Stephen Harper's election campaign. But it turns out that the boy he is shaking hands with is his own son!
Posted by Al S. E. at 10:56 a.m.