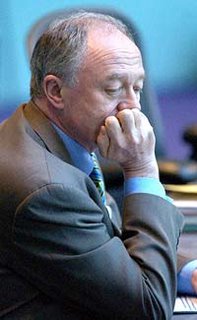 Ken “Red Ken” Livingstone, the mayor of London, has been suspended from his job for one month for telling it like it is, which has always been his way.

For readers who may not know who Ken Livingstone is, I’ll briefly say that he is what a politician should be, but most politicians are definitely not. He sees politics not as a means to advance the interests of oneself or one’s own class, but rather as a way to make this a better world. This assertion should, on one level, be the obvious job description of a politician, but, on another level, admittedly makes the speaker sound naively out-of-touch with “the real world.” The fact that the politician's obvious job description should appear so unrealistic is itself a clear indication of how thoroughly corrupt most politics is.

The event that has got Ken into hot water with the British Establishment happened when a reporter from the Evening Standard accosted him while he was leaving a party for a gay politician. The Evening Standard, which Ken has described as “a load of scumbags and reactionary bigots,” has been a bitter opponent of Ken Livingstone in every possible way.

When the reporter identified the paper he works for, Livingstone, not knowing anything about the reporter, said “What did you do? Were you a German war criminal?” which is something along the lines of what I might have said had I been in Ken’s shoes. What else can one say to a person who has deliberately chosen to work for a reactionary rag?

The reporter said he was Jewish and therefore found the remark offensive. Livingstone again said what I might have said in his place. He compared the reporter to a “concentration camp guard – you are just doing it because you are paid to.” Wasn’t he right? What was a Jew, supposedly a member of a highly-persecuted minority, doing working for "a load of scumbags and reactionary bigots"? More importantly, shouldn’t we all question who and what we work for?

As Ken’s punishment is far worse than his perceived “crime,” it is clear that there is more going on here than what the official version reveals. The Establishment gets very concerned when someone brooks ultra-radical ideas such as the obligation to question who and what we work for and who our employers are and do. Perhaps Ken was also seen as having questioned the sacred “right to work,” a weapon often wielded by strike-breakers.

The panel that suspended him has accused him of bringing his office into disrepute. That is quite ironic. The office of London’s mayor has never been more highly regarded than during Ken Livingstone’s mayoralty.

Ken Livingstone has repeatedly angered both Zionists and the Establishment by promoting unpopular (among the elite) groups and causes, both in Britain and abroad. Ken’s opponents have now coalesced around the hyped-up charges, that is, around an issue that affects the interests of both groups.

Around the world, multi-frontal Zionist assaults continue apace, using different tactics, ranging from terrorism (the destruction of the Askari Mosque in Iraq), to political manipulation (Ken Livingstone’s case), to encouragement of media assaults on Islam (the Danish episode).

Ken has announced he will decide by next week what action to take against the panel’s decision. My guess is that he wants partly to use the time to gauge his support. It is vital to prove to him that he does enjoy wide popular support, both within and without Britain.

If Ken’s appeal fails, he would be responsible for his own legal costs, estimated at 80,000 pounds. I think a proposal to set up a legal defence fund would be a good idea.

Ken has repeatedly stood up for what is right. Now is the time to show that the public (both locally and globally) appreciates the unique politician that he is.
mayor@london.gov.uk
Full contact info

Update:
Ken Livingstone's statement on the suspension of his suspension
Posted by Al S. E. at 4:43 p.m.

You're absolutely right. As a Londoner who voted for Ken I want my Mayor in charge during March, not banned from office.
He was great after 7/7, he got us the Olympics, and he's a top bloke. But even if I hated this, and he was a right wing extremist (who you might expect to make the rather inappropriate comment that he did) I would still not support him being banned from office. This democracy is messed up enough as it is, without unelected individuals banning elected ones for insults. There was no crime. Give us back Ken!
If any readers want to read my blog, pleased be warned that the language is appalling.
All the best

Could've been worse. Could have called him an IDF Stormtrooper

Ken Livingstone and Tony Blair are very similar in that they both make decisions that, at the time, may appear unpopular: the difference is Ken gives good arguments as to why he has taken certain paths and sticks to his principles. Tony Blair has lost both direction and his principles.

First of all, Ken Livingstone first came to my attention, here in Melbourne, on the 07/07 when he made that speech to Londoners and to terrorists that put a lump in my throat and almost made ME proud to be a Londoner... even though I'm a proud Melburnian through and through. From what I have seen of him, London should be proud to have a mayor like this.
Secondly, and most importantly, as someone commented earlier, the main issue is not what he said, or even who he said it to, nor is it an issue of questioning who you work for a living for, but comes down to democracy.
No-one, ever, who is put in office, should be taken away by a 'panel'. The only way a person should be removed from office, no matter how much one disagrees with them, is through democratic means (unless of course criminal activities have occurred that have passed through the courts) - Ie, If we the people on the streeet can't actively remove this person, it must be by people we have elected to keep the others accountable. Again, not a panel.