Why we love Fidel 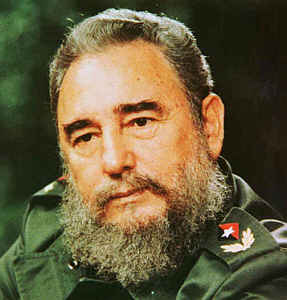 Why do we love Fidel?
Because we love the idea of “Fidel”
Because we think there has to be some other way
That there must be more to life and to living than this
That life and living must have some meaning too

Yet, we know Fidel’s time is past
We know the idea of “Fidel,” too, will some day succumb to the unipolar world that is getting narrower every day
Still, we keep hoping
Still, we see signs that the idea of “Fidel” may be permeating into other places too
Fidel who, once the Soviet Union fell, was left isolated and friendless, is finding new friends and allies

But the unipolar world, too, is hard at work
Its slogan is “You are either with us or with the terrorists”
Its slogan is “democracy,” but only if democracy doesn’t harm its own interests
It supports all autocratic governments, but considers Fidel a dictator
A dictator who has given free education and healthcare to his country’s people
And many other things besides
So we must either be with Bush or with Fidel

But even if some day Fidel had to leave, he will go with honor
He will hold his head high
The same way that his nation – his comrades – hold their heads high
Because he never yielded
He was never like autocratic rulers who sell everything that they have and that they are, all in return for worldly power and status

So, long live CNN and the “free” press, the boundaries of whose freedom are set by multinational corporations!
Long live the hundreds of meaningless brand names, trade marks and logos!
Long live luxury cars and even more luxurious houses, which most of us only see in our dreams!
Long live the material world!

I certainly believe in the ideals of the Cuban revolution - expelling foreign corporations and nationalizing their assets for the good of the common people. And certainly a benevolent dictator who truely has the interests of his people in mind is better than a corrupt democratically elected government who owes allegiance only to the corporations that got them elected. I would argue, however, that neither is desirable.

How do you respond to the allegations of human rights violations? What about the thousands of political prisoners who were supposedly executed?

I have no doubt that there is a great deal of misinformation put out by the capitalists who are upset that they lost their exploitive financial empires, but it seems unlikely that all of the allegations could be false.

He is certainly no Chavez or Allende. They were both democratically elected, and brought about their socialist revolutions through purely peaceful means. The fact that Castro survived and that Allende did not could be used as an argument that socialism and democracy don't mix, but Chavez seems now to be proving that wrong.

I believe in cuba, Fidel and the ideals of the revolution.
The world need to change...