Roadmap to Peace in the Middle East and Everywhere Else 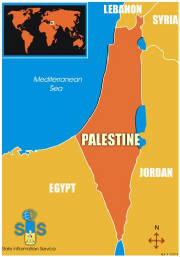 Israel doesn't have the right to carry out brutal imperialist wars against it's neighbors, but they still have the right to exist. To say otherwise gives validity to those who call anyone who doesn't support the war an anti-Semite.

As I understand it, Israel before 1948 was a Brittish colony with a population mixed with Muslims and Jews. When it was given independence, two side by side states were created, one Muslim and one Jewish. This created not only Muslim refugees in Israel, but also Jewish refugees in Palestine. Clearly a single democratic state encompassing both Muslims and Jews would have been preferable, but my point is that if the Palestine created by this mistake has the right to exist, doesn't Israel?

I will admit that my knowlege of the history is very limited as it is virtually impossible to find an unbiased account. Therefore, it is very likely that I have some of the facts incorrect, or am missing vital information, so I hope that future commentors will correct any inaccuracies.

I.M., Israel was expressly created by the imperialist powers "to carry out brutal imperialist wars against its neighbors." I can't quote any "unbiased" sources for my assertion, but I can refer you to Noam Chomsky's book "Fateful Triangle," in which he explains in detail the reasons for Israel's creation and the manner in which the Israeli State has carried out the mandate assigned to it by the imperialist powers.

There are, however, no "unbiased" accounts. The Right and the liberals are generally supportive of the Zionist entity, due to the coincidence of their respective interests. They tend to label as “biased” anything that is contrary to those interests. A leftist, by definition, decides which side he/she is on (i.e., on the side of socio-political justice), and proceeds according to that “bias.”

Briefly, there was no “Israel” prior to the late 1940s, except in ancient semi-mythical times. The Palestine Mandate called for the creation of two states, one Jewish and the other one Palestinian. Only the Jewish state received imperialist support, and it was the only one that was actually created. The imperialists created it as a destabilizing influence in the Middle East, impeding the region’s socio-political progress, and thus perpetuating its vulnerability to imperialist domination (the imperialist powers care neither about Jews nor about Arabs nor about anyone else; all they care about is their own economic interests; they created Israel purely out of self-interest).

If saying so makes me an “anti-Semite,” I can live with that. Many thousands of anti-Zionist Jewish people are apparently “ant-Semites” as well. We should not be vulnerable to the convenient labels thrown about by the Right and the liberals (such as “anti-Semite,” “biased,” and so on).

As I and most other people on the left see it, there is no room in this world for the racist State of Israel, in the exact same way that there was no room for the Apartheid State of South Africa. It must be replaced by a non-racist democracy.

In retrospect, my wording was not appropriate, and I apologize. I didn't mean to accuse you of being an anti-semite or anything like that. What I meant to say was that anyone who opposes Israeli aggression is automatically assumed to not support Israel's existance.

Thank you for the Chomsky reference. If there were ever an unbiased account, that would certainly be it.

hi Al S E, your posts [as well as your replies to readers' comments] are extremely well written!!! Keep it going!

Amen! Your solution for Peace in the Middle-East is the only solution, people know it is but are afraid to say it...Keep up the good work!