An Israeli recently arrives at London's Heathrow airport. As he fills out a form, the customs officer asks him: "Occupation?"


More Lebanese jokes about their situation and their imperial neighbour:


Three Hezbollah fighters run out of Beirut's southern suburbs after Israeli raids, flashing the victory sign. Actually, no. They were really pointing out that there were only two buildings left standing.

Why did rents go up in Ain el-Rummaneh district overlooking the southern suburbs? Because it has a sea view now!

Why are coquettish elderly Lebanese women very happy about the war? Because it took them back 30 years.

Why will Hassan Nasrallah, the Hezbollah chief, win the Nobel Prize for education? Because he is the only man who sent one million people to school in just two days.

Israeli Prime Minister Ehud Olmert was sitting in his office wondering how to invade Lebanon when his telephone rang. Beirut's most famous imaginary character announces to him in a heavily accented voice: "This is Abul Abed and I am calling to tell you that we are officially declaring war on you." "How big is your army?" replies Olmert. "Right now," said Abul Abed, "there is myself, my cousin Mustafa, my next-door neighbor Abu Khaled, and the whole team from the teahouse. That makes eight!" Olmert paused. "I must tell you Abul Abed, that I have 1 million men in my army waiting to move on my command." Abul Abed paused, then said: "Mr. Olmert, the war is still on! We have managed to acquire some infantry equipment!" "And what equipment would that be Abul Abed?", Olmert asked. "Well sir, we have two Mercedes 180s, and a truck." "I must tell you Abul Abed that I have 10,000 bombers and 20,000 fighter planes. My military complex is surrounded by laser-guided, surface-to-air missile sites. And since we last spoke, I've increased my army to 2 million!" "Mr. Olmert, we have to call off this war," said Abul Abed. "I'm sorry to hear that," said Olmert. "Why the sudden change of heart?" "Well," said Abul Abed, "we've come to realize that there is no way we can feed 2 million prisoners!"

Olmert sent a commando operation deep into Lebanon. Mission: Capture Lebanese diva Fairuz. He insists on finding the only bridge he did not destroy: An imaginary bridge evoked for decades in a romantic Fairuz aria. "On the bridge 'Lawziyeh' under the shade of the leaves," goes the song.

Early one day, a man rushes desperately to the dentist. "Please take out my bridge, or the Israelis will bomb it!"

After Saudi Arabia decided to donate half a billion dollars to rebuild Lebanon, Hosni Mubarak, the Egyptian president, ordered the capture of six Israeli soldiers at the border.

Amid a mass evacuation of foreign nationals from Lebanon, Palestinian refugees who have been stranded in Lebanon for nearly 60 years are ecstatic: The Palestinian Authority has decided to evacuate its nationals as well. 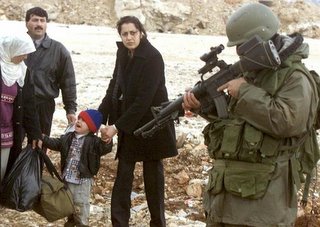 It is a good thing that we still joke about our endless miseries! The bright side of wars!!!!

It's a classic and insightful joke. Humour is often the best form of looking at an uncomfortable truth.

I'm an Egyption :$ & really liked ur blog but wanna add an information about all this middle east problems
that fighting the arabic puppet regimes like Mubarak,s in Egypt is an essential part if we wanna make a real peace ,freedom & liberty 4 all the world including America & Israel
cuz injustice is making so much anger in the islamic countries that no one can expect what will happen next

I remember reading these jokes while visiting family. With the pictures of seeing people sitting on their rooftops smoking shisha and drinking tea while bombing takes place all around them. You just can't break the Lebanese spirit...

may the Lebanese spirit be stronger than ever!
reading your blog has made me realise how lucky i am... though that does not make me less emotional.
i cannot say i understand what you guys are going through, the trauma, the bitter war... everything, cos I have not experienced anything remotely atrocious.
thanks for setting the record straight on the Pope's (not-so-clever) comment and the rest. Very insightful.