The "Merry Christmas" versus "Happy Holidays" debate cropped up again this year, seemingly with greater vigour than in previous years. The crusaders against decency and good manners, who prefer to be thought of as warriors against political correctness, occasionally helped by their liberal fellow travellers, kept up their annual lament about the supposed demise of Christmas. Their basic argument is that since Christmas is a tradition in these countries, everyone should embrace it. They avow distress at hearing "Happy Holidays" supplanting "Merry Christmas." Simultaneously, the religious right makes the celebration more and more exclusive. The Christmas celebration used to be a season of joy and good will on the occasion of the anniversary of the founder of Christianity's birth, with the emphasis on joy and good will. Now the religious right and their deluded allies want it be about Christ, and only about Christ. If they want everyone to embrace it, they should, by definition, make it more inclusive. Non-believers and followers of other religions would be glad to say "Merry Christmas" if it doesn't imply negating their own beliefs. 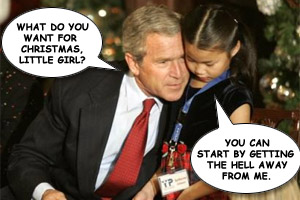 Thank you. I'm also tired of the pointless religiosity from people who wear their faith on their sleeves. It is more important to me at this time of year that ethics be lived than a simplistic morality be displayed.

Thanks for your comment, Gerald. As we are in agreement on the original issue, I'll just add that I wish the religious right's polemics on this issure were in fact, as you put it, "pointless." In reality, the things that they say always cover a hidden agenda. When they talk about the perceived dilution of Christmas, for example, they are actually talking about their oppostion to immigration, or to "mixed ethnicity," to use Charlton Heston's phrase.

This is an ironic debate, since the origins of Christmas are not Christian at all. Even most Christian scholars concur that Jesus could not possibly have been born in the winter (shepherds would not have been tending their sheep in the fields at night in the winter, for one thing,)not to mention the fact that Christmas trees, mistletoe, yule logs and Santa Claus have other origins. I am new to reading blogs and blogging and am happy to find such an intelligent site, whether or not I end up agreeing with you or not. It's good to have healthy discussions.

Thanks very much for your comment, Karin. As much as I enjoy having people agree with me, I find disagreement just as stimulating, possibly more so. After all, disagreement and "healthy discussion" is the lifeblood of the Left (or the "liberals," to use the US word).

Yes, it is, but it's also stimulating to some people who are on the right, or, perish the thought, apolitical. I'm actually a Christian, but my Christian beliefs are not all mainstream Christian views, and I love discussion. I'm an advocate of thinking outside the box, of looking at all sides of an argument, and of logic and reason.

Thanks again, Karin. If American Christians could be made to understand that Christianity's real message is exactly the values you have mentioned (thinking outside the box, looking at all sides of an argument, logic and reason), we would have a much better world. Regrettably, most people who call themselves "Christian" in the US seem to have shut their eyes and ears to the real message of this religion. They are quite willing to condone mass slaughter of innocents for no reason other than oil and the furtherance of US geopolitical interests.

Thinking outside the box has led me away from adhering to any political party. The difficulty for me lies in the fact that there not only aren't any candidates running that I respect, but that neither the right nor the left embraces exactly what I think, but I'm definitely not an extremist, either. So while I not only recycle, use cleaning products that contain no petroleum products, etc that have a much better impact on the economy (how much does recycling do for the environment if we continue to spray with pesticides and herbicides, use chorine bleach like there's no tomorrow, etc) and think it's abhorrent to send our military around the world to fight in battles not our own, I also believe we need to bolster the military solely for the purpose of self-defense because I just don't believe we're going to rid the world of tyrants and bigots by signing treaties. Is there a party that supports both of those beliefs? Or any of my other seemingly conflicting beliefs? I like neither Bush nor Kerry, have problems with both the moral majority and the extreme end of political correctness (go too far with either and you end up with censorship.) This Merry Christmas vs Happy Holiday is a debate that is unlikely to be resolved to the satisfaction of both sides of it. In some ways, that is negative because we aren't going to all get along, but in some ways it's fine because it means we live somewhere where we're free to express our views. While it would be nice to see everyone get along I think it's an ideal unlikely to be attained in our lifetime. Better to believe something strongly than to live life lukewarm on issues and to acknowledge that there are times, such as this, when it might be wisest to simply agree to disagree. If someone wished me a Happy Hanukkah or Happy Kwanza, I would hardly find that offensive even if I don't celebrate either, and not simply because those that celebrate them are in the minority. I don't let myself get offended when some Americans tell me how terrible it is that all those foreigners are coming into the US when I'm one of those foreigners who came here. Just the fact that they can't even tell I am one indicates that they don't understand the issue deeply enough and that they have forgotten that their ancestors arrived as immigrants, too (note that not one Native American has ever made such a comment to me).

I grew up loving Christmas without any mention of Christianity - just love and joy and snow and helping the poor and getting and giving presents. This is how I continue to celebrate. I don't think anyone can "make" Christmas anything. It's up to the individuals who celebrate.

That being said, I'm leaning towards calling it Xmas.This is probably partly because I'm so alienated by Christian extremists. It's a shame too, because I have lots of Chritian friends who I care about respect. I hope I never forget that.

Nice job done in summarizing the struggle undergone every year in relation to Christ and Christmas.
I grew up without Christianity, and now am a Christian who 'wears the religion on their sleeves' (loosly quoted). In other words I can appriechiate both points of view. Mine lies somewhere in the middle.
I would want to say "merry Christmas" to people when I am shopping, or moseying around town. Why shouldn't I? I grew up celebrating Christmas, even without the "Christ" in it. If you celebrate another holiday, tell me. I'm all for multi-culturalism. I'll apologize and wish you happy whatever holiday it is that you are celebrating. No need to get uptight and upset over it.
As for you, person whose name I forget, you commented on 'thinking outside the box,' etc, what standards shoudl you be going by? God's (clearly written in the Bible) or your own (which I am guessing change all the time, heck mine do)? Do you really seek to understand what is written there? (In other words do you check what mean what based off the content of what is written, and how it is applicable today?) And most importantly, in your attempts to 'think outside the box,' could you actually be restricting yourself more, and putting a slant on what is written in the Bible that doesn't belong there.
(The last paragraph is all rhetorical questions.)
(To the writer of the blog:) Sorry about all those questions there. I always get interested when people bring up different points of views over the Bible. What's more, if they're good, I'll listen.
And furthermore, those questions even have a point in the broader perspective of what has been written here. It is my belief that this issue reflects on something deeper than the simple mentioning of Christ on either part. What it is, I'm not entirely sure. Maybe we should probe deeper, and ask more questions like I just did to that other reader. Or we could just leave it and try so hard to convince ourselves that we love this blown-up time of year so much. What with all these stupid arguements...
Personally I have different fish to fry, different pet peeves to take care of. Why are Canadians so caught up in US statistics, politics, whatever? Don't we have a land, a government, a system of our own, that are in desperate need of care just now? Just a thought, you know.