Both the Democrats and the Republicans lost the recent Presidential Elections in the US. Everyone knows the Democrats lost, but that does not mean the Republicans won. Bush voters saddled their own country and the world with a President that no-one respects, and who will thereby be unable to implement any kind of agenda, whether positive or negative. Not to speak of the fact that he has his own personal agenda that has nothing to do with what is good for the US or the world: "I'm the kind of fellow who does what I think is right and will continue to do what I think is right." Needless to say, what he thinks is right is not necessarily what is good for either the US or for the world. But try to explain that to a Republican voter... 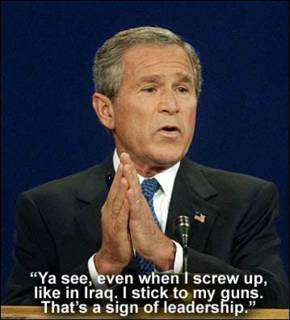 As far as information goes you are informed. But, you are only as good as the information you've got. Your source(s) is/are elitist and I would venture, lacking in context. One shouldn't comfort oneself with a source and/or its' "variations on a theme" when it is one sided. You have computer access. There's a wealth of diverse opinion "out there" where context may be enhanced. One site is "realclearpolotics.com". There you'll find a divergence of opinion with which to "round out" your opinion.
In this imperfect exercise of self government no one is ever fully satisfied. Compromise rules the day of anything that should get done.
It is important to note that because many people adhere to a perception loudly does not necessarily make it true. Their perceptive qualities could be clouded by the quality of information.
Pessimism, though, predisposes one to discount whatever would conflict with that outlook.

Thanks for your comment, "Madera." As members of the intelligensia, we are probably all elitist in some sense. But I don't think it means we are unable to see the truth, especially when it is staring us in the face. It is quite true that, under liberal democracy, many people are always dissatisfied with election results. But there is dissatisfaction and there is dissatisfaction. In most US presidentail elections prior to the one in 2000, the electorate accepted the results, because they believed that the elections had been run in as fair a manner as they could be in an imperfect world. Things changed in 2000. George W Bush won the 2000 elections not because he deserved to win. He won them because of the massive fraud perpetrated by his brother in Florida, his own bullying of the Democrats, and the Supreme Court's astounding behaviour. Bush again went on to win the 2004 elections by bullying and fraud, which I don't need to go into. The result has been a loss of legitimacy of the office of the US President. The unprecedented nature of the domestic opposition to the Bush presidency is evidence of the fact that this is much more than a matter of perception.

I will not grant you that shibboleth: fraud...; dissenfranchizement...; selected, not elected...; dullard...;...etc. It goes to the very notion of information. There is a wealth of well catalogued information that would dispute that. I am not here as an advocate in that I believe you have the capacity by yourself to access this if you are curious. It does take me to the quality of information an "advocacy" media would acquaint you with.
What you speak to primarily is a perception created by an "advocacy" media, often repeated (bombarding, perhaps), lacking in context which will lead to conclusions I see and hear not just in your writing.
It is important to note that there were contentious times in several and many election cycles. Spirited you might say. David McCullough’s book “John Adams” is one source comes to mind. Also, though, in that book goes to the nature of a “debating society” (which might withhold respect of legitimacy) v. taking action (appalled at paying tribute to the Barbary Pirates) with the information at hand based on principle. There’s nothing new , in many ways, going ‘round nor coming ‘round

Thanks for your reply, Madera. I will grant that there are all kinds of "information" around. But as I respect your wish not to act as an advocate, I won't get into comparing the quality of the information available from the various sides. I just want to mention that I find the phrase "advocacy media" a very curious one, especially as I assume it means the media is liberal. From where I sit, all of the major American media look ultraconservative. From the time of the events of 9/11 they have scrupulously avoided performing their function as the Fourth Estate. Instead, they have acted as the US Government's mouthpiece.

In the case of the 2004 elections, as well as the 2000 elections for that matter, the major US media tried to minimize the amount of "negative" information that was getting out. They reported things when and if they had to report them, in other words, when not reporting them would have exposed their bias against the non-governing party.

There are two principles that I see in this...

First, an electorate gets the candidate that the majority deserve, not want.

Second, the US system of democracy is going to continue to suffer from this kind of result for as long as the method of candidate selection concentrates on lowest common denominator and money, rather than ability to do the job.

Thanks for your comments, probligo. What you say is true. I think one should take the further step of asking why things are the way they are. The majority get the government they don't want because they don't know what they need. The American people live in an environment saturated with propaganda, and so they seek answers to their needs within that propaganda. They want to feel safe, for instance. The propagnada tells them the way to be safe is (a) to vote for a "strong" candidate who is perfectly willing to kill hundreds of thousands of people elsewhere in the world, and (b) to have a gun. Both of these will, of course, make them less safe, but they don't know it. The reason they don't know it is that they don't know the real motivations and interests of the people who rule them and who bombard them with lies. Bush does have the ability to do "the job," as "the job" is defined by the propaganda system. Ability is not the problem. The problem is the job description. And the job description won't change unless and until the American people themselves change it.

I have collected the evidence on Bush's Ukrainian-style electoral fraud here.

Thanks very much, Richard, for your comment and for your work. As you point out, the Democrats have twice gone to metaphorical slaughter like sheep, without raising as much as a baa. To me, this issue itself is the crux of the matter, and a symptom of the underlying problem, not only in the US, but in much of the rest of the rich countries as well. I will expand on this point in my blog sometime soon.