Washington ships its garbage to Argentina

"It gives me pride to be on this train to repudiate the human trash that is Bush," Maradona told reporters before approaching the dimly lit platform, where Boca Juniors soccer club fans greeted him with pounding drums and stadium chants. 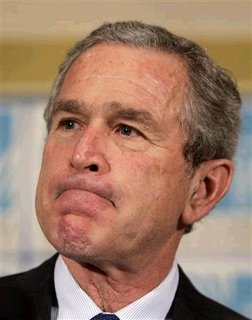 Meanwhile, Vicente Fox, Dubya's spokesman in Mexico, has come up with the brilliant idea of excluding from the FTAA any country (read: Venezuela) that disagrees with his master. I wonder what Fox will propose to do with the huge majorities in all the other Latin American countries who also want no part of any deal that has Dubya's stench associated with it.
Posted by Al S. E. at 11:20 a.m.

Greetings,
I'd be interested in hearing if bush's numbers are as bad in Canada as they are here in the U.S. How's he looking in Canadian polls?
Personally, I'd liked to see him removed from office and exiled to an uninhabited island.

Thanks for your comment, Mokawanis. Your sentiments towards Bush are shared by people worldwide. The latest comprehensive poll that I am aware of on Canadian attitudes towards things American was taken almost exactly one year ago, that is, just before Dubya's "re-'election.'" One could say, on the basis of that poll, that Bush’s approval rating in Canada at that time was about 17 percent. It is bound to have declined considerably since then, as it has in the US. Had Canadians, rather than Americans, been choosing between Bush and Kerry, Kerry would have garnered more than three times as many votes as Bush. As soon as you step outside the borders of the US, no matter where you go, nearly everyone hates Bush with a visceral hatred, and a part of the antagonism to his policies often springs from a hatred for the man himself as an unethical bully.

I think Bush is pretty much despised everywhere outside of America.

However, outsiders may not always be right: As far as I can ascertain Maggie Thatcher was acclaimed accross most of the world, but here in the UK we used to wake up each morning in dread, wondering what idiocy she'd decided today and how much worse life was going to get because of it. 15 years later & the Tory party still hasn't recovered any standing in the country.

Maybe the USA will get 15 years od Democrat rule following the Bush Debacle?

To Mrs Aginoth: The way I remember it, Margaret Thatcher was also universally despised, at least by the people who had heard of her. The only people who admired the Iron Lady (I prefer to call her "the Iron Maiden") were some of the neo-conservatives around Reagan, and they admired her for purely ideological rather than personal reasons. The reason one out of every three Americans still approves of the way Bush does his job has more to do with the peculiarly American jingoism that says "Our President, right or wrong," combined with the thorough ignorance and indifference of the great majority of Americans regarding the rest of the world. This ignorance and indifference is a phenomenon unique to the US, rooted in their "educational" system and reinforced by their mass media. Even their most “liberal” mainstream media are little more than pro-government propaganda outlets. Right-wing evangelical brainwashing, another phenomenon peculiar to the US, also plays an important part.

Hi, interesting website, I've got a blog of my own, a little less "radical" (for lack of a better word) but I think we're on roughly the same page! Have a look if you're interested. I shall be keeping this blog on the radar screen!

Personally i dont like him one bit. Now for el pibe Maradona to go ahead and protest against Bush... Do you have any idea how influential is Maradona? Hes god to most of south america i should know. Not that it matters much since most south american countries dont really like Bush anyways.

I for one believe south america should unify under one banner like europe has done. Create their own market, let the us and mexico fuck each other up the ass. Invite cuba to join the union and stop beign sucked out of resources by the biggest consumer in the planet.

Don't be so sure about the Bush debacle producing 15 years of Democratic rule. That would presume that the Democrats are able to get their heads out of their asses. I can't think of one Democrat I would vote for in 2008. I am from California. I believe that both political parties have failed the United States. The real winners are the corporations.

i think bush is a dork and a half but maradona is no genius either. didn't he flee to cuba when he was almost croaking from cocaine abuse and relied on castro to nurse him back to health.

i guess the same hand of god that scored his big goal also saved him to take on bush.

Canadian attitudes towards the US administration were measured recently by Environics... have a look here.