Bush apologists love to go on about the beheadings in Iraq as soon as you bring up the subject of the responsibility of US soldiers for Abu Ghraib and, much more seriously, the civilian casualties in Fallujah. But are the same standards to be applied to professional soldiers as to individuals who are, after all, "terrorists" and "insurgents"? There is no logical equivalence between the killings by US soldiers and the killings by the "insurgents." This is not just for the basic reason given above, but also because of the deeper reason that the US has been massacring members of a completely legitimate resistance movement. There is no ethical equivalence between the actions of a member of a resistance movement and those of a soldier of an occupying army. Even the Nazis in France didn't use the excuse of the presence of members of the French Resistance in French cities to destroy those cities and massacre their populations. A parallel case to the above situation has been going on in the Middle East in the American proxy state of Israel, where the Israeli government has for years used the attacks by members of the Palestinian resistance movement against Israeli targets to rationalize its own attacks against innocent Palestinian civilians. 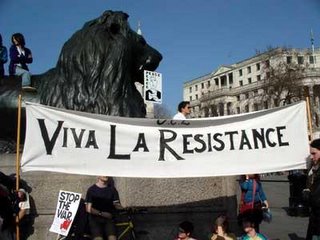 I've been searching for a parallel and you've got it in your comparison of the way we are killing innocents in our war in Iraq to get "terrorists," and the fact that even the Nazis didn't bomb French cities to kill the underground. Great comparison! With your permission I'll use it in my own blog.
I'm totally new to this so bear with me.
MJK

Thanks for your comment, Matthew. Please feel free to use the parallel, with proper attribution to this blog. The latter request is not just for the sake of my vanity, but mainly because I want to "spread the word" as widely as possible.

This is a fantastic post and an awesome blog! Wow! I've been asking the same questions on mine for so long. I especially appreciate that you mention the modeling of American foreign policy (or was theirs modeled on the US, hard to say) of Israel,particularly paralleling the use of torture and illegal imprisonment.

Thanks for your comment, Jen. The history of the United States in the last hundred years has been the history of a country that has been constantly testing the boundaries of the atrociites it can get away with. In this way, it has not made the mistake that Nazi Germany made. The US, unlike Nazi Germany, has always made sure it had the military and propaganda power to get away with murder before it proceeded to commit murder. The Nazis, though past masters at murder and propaganda, failed to watch their backs. The US has alwasy made sure its back was covered. The symbiotic relationship between the US and Israeli governments is based on the fact that Israel is the primary laboratory where many of the atrocities are tested and practised.

"Even the Nazis in France didn't use the excuse of the presence of members of the French Resistance in French cities to destroy those cities and massacre their populations."

No they didn't, but the french resistance did not attempt to kill french citizens en mass, as the Iraqi insurgents.

Calling iraqi insurgents (Sunni led) the "resistance" overlooks that the struggle is against Sh'ite population AND American forces. Which I think is the case. Because of the American occupation and push towards democracy, Iraq is leading to a civil war. Sadaam kept it in line, the minority had control, using fear/toture/killing.

I think your example of Israel and Palestine, is almost an example of valid resistance as a result of occupation. In cases where palestinines suicide bomb checkpoints they are wanting to kill soldiers. However, resistance in not suicide bombers detonating themselve in cafes, hotels, and bustops. That is terrorism. Resistance fights the power, not the everyday people. When Isreal kills civilians, it is "collateral"..they target terrorists.
All that being said. I do think the US should never have entered Iraq, and Israel shoul give up all the land that they occupied after being attacked (west bank). However, Israel does need the US, and alays will. If Iraq does pull itself together, the US will should aid Iraq as much as it has Israel.