There are "signs" the lunatic right may be right, no matter how distasteful the idea may be to rational people. There are signs these may be the "last days." I, as an agnostic, would be the last one to discount any idea out of hand, even something as preposterous as this one.

Not long ago the word Armageddon signified the worst possible thing that could be imagined, namely, the end of human civilization through nuclear holocaust. Today, it signifies, at least to the lunatic right, the best possible thing that can be imagined, namely, yes, the end of human civilization, but with this difference: After everyone else has perished, the lunatics would be lifted up unto heaven. It is a consummation devoutly desired.

There are corollaries to this new worldview. War is good, because peace and progress can never lead to the volcanic catharsis that would necessitate divine intervention. It is best to have insane leaders, because sane ones are not likely to make the "correct" decisions that will bring on the end and the new beginning.

This has been achieved. Bush wants war to bring on the Second Coming. Cheney wants it so his former company will profit by it, no matter how many hundreds of thousands of people get killed in the process. And the rest of the gang have simply sold their souls to the devil.

So maybe I should redefine the nature of the "last days." Maybe the last days do not have anything to do with divine intervention or lack thereof. Rather, maybe the last days have to do with a human race that has become so corrupt and selfish that it looks away from the misery of its fellows, consciously and knowingly. These may be the last days. But only because we have made them so. 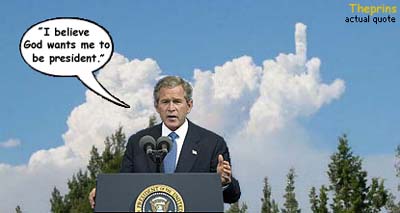 maybe it's that those who are in charge of creating our culture, those who we allow to determine our path have created this "end days" reality due to the simple fact that they believe in it & it unconsciously makes them create the scenario in reality. maybe it is the belief that CAUSES the reality & not vice - verca.
the only reason that the "devil" or any of that exists is solely because it is given power by those that believe. this adolescent idea of dualism may be the cause. us vs. them, the chosen vs. the stricken. this is NOT a product of natural human evolution or cultural evolution, but a direct result of monotheism. what are (falsely) considered the main 3 religions (and falsely considered different even though they have the same root), judaism, christianity (constantinianism), and islam, are the main causes of this mindset & the majority of warlike strife in the world. islam enslaved north africa & developed the interior slave trade of that continent before europeans began the practice. The jews slaughtered all of the men & women except for those that were capable of breeding in the original aquisition of the holy land, and christians have had the inquisitions among much else.
monmotheistic religions are the only ones which do not make room for other beliefs. in the lst few centuries, they have had an increasingly negative influence on the beliefs of hindus as well.
basically, intolleranve breeds intollerance.
we are still trying to act like we are in tribes, but we do not have the basic symbiotic & balanced way of living that tribal societies have. they may have war, or battles, but not to completely overtake the "other". it is rather to set boundaries & define the identity of the tribe.
it is not that we look away from the suffering of others, but rather, that we look away at how our everyday activities are responsible for this suffering.
your every purchase, your every meal.your every investment. how many actually know what is behind these things? who is exploited for the profit?
the only way things will change is if we take that personal responsibility on & are capable of making the choice of non-compliance when we discover that something causes suffering.
but most do not have the strenght for that, so we need to instill that strength instead of bashing people when they are down.
answers & guidance instead of judgement.
then we can be free of this b.s. paradigm of the "end days"
nice post.

Thanks for your comment, Intuitive Cat. It was very interesting. I should just add that my post about the Armageddon was tongue in cheek. I don't believe in the "last days" any more than I believe in any of the other nonsense the loony right believes in. I just sometimes use their language, because that's about the only way to communicate with them.

Isn't there something about an Antichrist that fools people into following him despite being a tool of the devil or something? Sounds familiar.

Thanks for your comment, JRH. Dubya's "re-election" is positive proof he is the Antichrist. Otherwise, he surely would not have been able to fool so many people twice in a row.

Hello,
A very interesting site you have here, with an impressive level of traffic. Given the tone of your political and social commentary, I welcome you to visit my site http://thetalkingmule.blogspot.com
My most recent column deals with democracy and morality, and it is the lead column at the blog.
I also recently wrote a column entitled " ARMAGEDDON" which for some reason would not post at the blog, but I will gladly forward it to any interested parties.
Enjoy.
The Mule

Thanks for your comment, Victor. There is an astounding quantity of ignorance and irrationality, not to speak of simple cruelty, in this world. But I believe we will overcome it all in the end. I don't give out my contact info through the blog, but if you do manage to put the article you mentioned on your blog, please let me know.