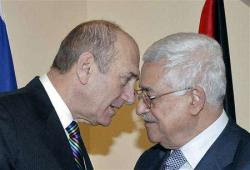 You may now kiss the bride

Rats leave a sinking ship – but what is an appropriate metaphor for people who deliberately board a sinking ship? That is where Mahmoud Abbas, the puppet head of the Palestinian “Authority,” has put himself. The fortunes of both of his mentors – the US and Israel – are in precipitous decline. But no matter. Mahmoud Abbas, who a friend of mine has given the nom de guerre of Abu-Hamar (that is, McStupid or “father of a donkey”), wants to be with the losing party.

The winning parties, on the other hand, are in rapid succession lining up on the side of Iran. Saudi Arabia and the Arab countries of the Persian Gulf have re-affirmed their political and economic interdependence with Iran. Afghanistan and Iraq have repeatedly declared that Iran does not support their domestic “insurgencies,” but, on the contrary, plays a crucial stabilizing role (guess which country plays a destabilizing role – you have one choice).

This means two things. First, the dream of Palestine as a multi-ethnic, multi-religious beacon of peaceful coexistence, embracing the entire territory currently called “Israel” and “the Palestine Authority,” is practically dead. Second, the anti-imperialist or post-colonial arrangement that is replacing the dream, which is centered around Iran, is of great concern to the imperial hegemon. Hence, for instance, the faked naval “encounter” between American warships and Iranian patrol boats. The video of the “encounter,” supplied by Iran, clearly demonstrates that nothing sinister happened. As the Iranian government has repeatedly said, this was merely a routine identification procedure of passing ships by Iranian patrol boats. The imperial hegemon and its local apprentice (Israel) have tried to make something more out of it. Abu-Hamar will, no doubt, soon join the chorus.
Posted by Al S. E. at 10:31 a.m.

Absolutely agreed with your sentiments. As a supporter of Fatah and the PLO until the death of Arafat, I am sickened by the way these guys like Mahmoud Abbas seem intent to give credence to building a Palestinian bantustan.

This is so funny how they guys are discussing about whatever they are right now...They must have maintain some distance...isn't it? Otherwise it's right to say that you may kiss the bride now...

Alse, where have you gone, man? I miss reading your writings. If you want to, drop by my page at nocowards.blogspot.com. Man, please come back join the fight for freedom again. Think about it, OK?