Israel, and its slave the United States, want Palestinians to give up the right to defend themselves! 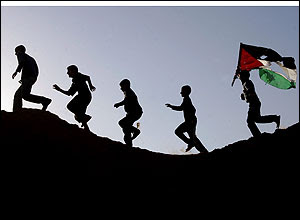 It is a unique historical phenomenon that Palestinians are being asked to give up precisely those rights. Israel is refusing to deal with the new Palestinian unity government. Why? Because, to quote Israeli Vice Premier Shimon Peres, "If this is a government that does not renounce terror, why should it be helped?” And what does Peres mean by “terror”? He is referring to the Palestinian unity government’s declaration that resistance in all its forms, especially non-violent resistance, to the occupation and continuing Israeli aggression is a legitimate right.

Who would in their right mind say this is not a legitimate right? Would you? Apparently the United States government, aka Israel’s slave, would say that. It is the only government in the world that, following the Israeli government’s lead, has dismissed the Palestinian unity government. According to Nancy Beck, the US State Department spokesperson, “The national unity government's platform reference to the right of resistance is disturbing and contradicts the quartet principle of renunciation of violence.” Since when has a renunciation of violence included the renunciation of the right of self-defence? I repeat, can a free person renounce the right to resist aggression and violence?

Update: Quote from Olmert: "We can't have contact with members of a government that justifies resistance, or in other words, terror." Resistance to oppression is "terror" -- but what else is new.
Posted by Al S. E. at 10:57 p.m.

An outstanding essay! You have touched on a key point as to what makes a people free.

I saw an American article this morning which pretended to see the Palestenian viewpoint, but which referred to Israeli "accusations" about arms being "smuggled into Gaza". A free nation does not need to "smuggle" arms; it imports them.