Reading the newsmedia’s daily dose of lies, their errors of omission and commission, has become an almost intolerable exercise for me. Jimmy Carter’s latest book is a refreshing change. The content of Jimmy Carter's book about Palestine has surprised me on so many levels that I don't know where to begin. Probably the biggest surprise has been that he doesn't write like a politician. He fearlessly tells the truth, and, with his background, he is in a position to know exactly what the truth is. His sole interest seems to be to tell the truth, rather than to protect any interests, which is again quite astonishing, especially in an ex-politician. Wasn’t politics supposed to be an institution whose function was to protect the interests of one socioeconomic class or another?

He tells the whole truth, and unhesitatingly points out lies and hypocrisies. To give a couple of brief examples: He explains that Israel’s supposed withdrawal from Gaza was no withdrawal at all, because Gaza remained completely under Israeli control. And he minces no words in describing Israel’s “security fence” as an “imprisonment wall.”

Predictably, various groups and individuals have accused Carter of being wrong or one-sided in his views. The reason they are so furious about the book is in fact the exact opposite of the expressed reasons. They hate the book exactly because it is not wrong or one-sided. In that sense, it is quite unlike nearly the entire content of the propaganda fed to us by the “newsmedia” and politicians. Reading what Jimmy Carter reveals will make you angry. For a change, though, what makes you angry will be the things that a politician is revealing, and not the things that he/she is hiding. 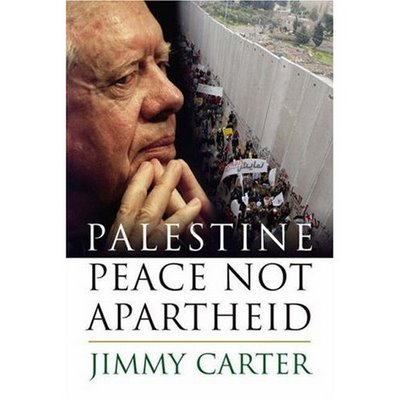 Unfortunately, his "candor" and lack of one-sided-ness was what seemed to doom his presidency. He was very much out there on his own, and on top of a number of unfortunate situations, his inability to cater to one side or the other really cost him support. I think that as a result, he has kind of become the "Obi Wan Kenobi" (pardon the cliche) of politics and foreign policy as a result.

probably wants to retire on a good note. Good for him and for everyone who wants to know what's really going on.

Interesting post - I thought you might be interested, that one of the Board Members,of The Carter Center (here in Atlanta), Melvin Konner PhD, MD, has publicly and in an opinion post in The Atlanta Journal Constitution called for President Carter to remove himself from the Carter Center, due to his biased and prejudiced book. Perhaps Doctor Konner will also be re-naming The Carter Center (which is part of Carter's Presidential Library) the Konner Center?
Thanks for posting. Bob