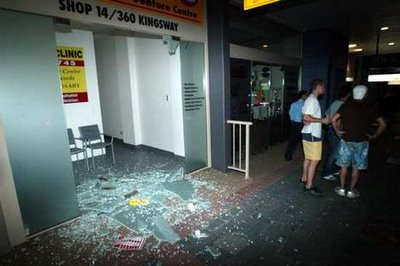 Australia's Fueh... er... Prime Minister John Howard has refused to attribute the race riots to racism. Hmm... Anyway, below are some highlights of Howard's career, which may shed some light on the current events.

He predicted, in 1985, that "The times will suit me." Not that the times do suit him, but that they will. He has made his self-fulfilling prophecy come true by pursuing policies such as:

I cannot agree with you more... It's really ugly for a country with multy ethnicity to have such incidences. Howard is falling in line with leaders like Sadam...

Read an interesting comment yesterday that all countries deal with racial tensions, and that leaders like to claim it's other nations that have the problem, not their own.

Why do we elect these people???

I can see the similarities between howard and Hitler. I have to say i don't think Howard's that bad yet but he needs to BE more accepting of differences instead of just pretending he is. Why does howard do everything bush wants him to?!!!

You certainly won't get an argument from me! I wrote a small piece on this issue too (19 Dec 2005)
Cheers,
MarkM

As PRan said, I really cannot agree with you more!
This is just too true a fact.All of these leaders such as John Howard and Bush, illegaly snatching his own citizens' privacy.

Howard's policies are reprehensible, but so far I don't believe they have been illegal. Not in the way that Bush has directly flouted the constitution in holding people without charge or trial.

In some ways what Howard is doing is even scarier - he's making human rights abuses legal. Australia has no bill of rights to fall back on.