Opportunism, thy name is Dubya!

Dubya has taken "responsibility" for the disaster-creating response to the Gulf Coast disaster. This is a man who in his whole life has never accepted blame for anything. So why the current uncharacteristic behaviour? I don't think the answer lies in the plummeting popularity ratings, as unpopularity is nothing new to him. It is something he has bravely weathered throughout his life! Rather, the explanation lies in his next statement: "Are we capable of dealing with a severe attack? That’s a very important question and it’s in the national interest that we find out what went on so we can better respond." Although the latter statement was made in response to a question and appeared spontaneous, the fact is that it has been a constant theme since the disaster. In fact, it has been a constant theme for the past four years. He has exploited nearly every single negative news of any kind since 9/11 to escalate the level of paranoia in the US population. Yet, it seems, he never felt he was being quite convincing enough. Dubya's "genius" is in his current juxtaposition of manufacture of paranoia and the Gulf Coast disaster. Rather than focusing on disaster prevention and putting in place better preparations for relief and rescue, Dubya's first priority is to tell the American people they have not yet sacrificed enough resources and rights on the altar of imaginary security. He chooses to exploit the tragedy of New Orleans to advance his agenda of transforming every single event in the world into an actual or potential "attack" on the United States. That so profound a lack of ethical bearings and simple humanity can be found in a man is indeed a marvel of historical proportions. 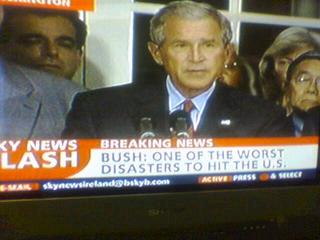 From an Associated Press story on Sep. 8:

Pelosi, D-Calif., said Brown had "absolutely no credentials" when Bush picked him to run FEMA. She related that she urged Bush on Tuesday [Sep. 6] to fire Brown.
"He said, 'Why would I do that?' " Pelosi said.
"I said 'because of all that went wrong, of all that didn't go right last week.' And he said 'What didn't go right?' "
"Oblivious, in denial, dangerous," she said.

Well, I beg to differ. Brown did have the one qualification that counts, namely absolute loyalty to Bush. The rest is immaterial.

Pelosi has got most of the rest wrong as well. Dubya is indeed dangerous—very dangerous—but he is not in denial or oblivious. Neo-conservatives don’t care what ordinary people think, or what effects their policies have on such people. Incidentally (or not so incidentally), they don’t care about their “legacy” either. All they care about is implementing the agenda they sought political office for. Again, the rest is immaterial.

The issue of Dubya’s approval rating, therefore, is irrelevant, because it doesn’t register where it could count, namely with Dubya himself. There is no threshold of popularity rating below which he would feel obliged to resign.

At the moment, the only thing that his buddies and he care about is that they will be able to make a whole lot of money out of Gulf Coast reconstruction, as they have and will through the Iraq war. Prior to Katrina, the only alternative available to them was to begin another war. Domestic reconstruction is much more convenient!

Bush puts forth a depressing agenda of keeping us in constant fear of attack and then tries to convince us he's our ever vigilant protector. This worked to his advantage after 9/11 but began to deteriorate when he launched the war against Irag. Now, with the war going badly, and after Katrina, public confidence in his leadership is at an all-time low. His inability to lead and his divisive policies have finally begun to catch up to him, and I believe he can't recover. Time will tell.

Just cruisin around....
Love the blog and pics.
What did you think of his speech last night? It made me want to clean my toilet for some reason
www.marypoppinsprivateeye.blogspot.com

Great blog....I LOVE Toronto...Although I tend to cringe when anyone outside of our border criticizes our president, as much as I hate him, you're criticisms are valid, well-thought out, and just damn spot on! BRAVO! I get to Toronto a lot and find myself apologizing on behalf of the red states.

Bush should resign and do us all a great favor...

I say impeachment! Bush is an emabrrassment to the U.S.

And don't forget that both the war and the reconstruction will be funded by countries like Japan, China and South Korea since the US govnernment is borrowing hundreds of billions of dollars every year from them to keep afloat.

Great insights! I think that Mr. Bush is not nearly so clever, though. Whoever has his hand up his bum, that guy is the clever one. It's the only way I can explain his dimwitted remarks matched with his uncannily lucrative policy.

Thanks for your blog.

Fascinating stuff, and I couldn't agree with you more. I think the trick to analysing Bush and his cronies is to never put anything beneath them. Guantanemo, demonising an entire religion and fabricating a reason to declare war show there is no depth to which they will not sink.

The disgusting political opportunism of his reaction to Katrina while those he abandoned were floating face-down in the network of rivers that used to be New Orleans was particularly sickening. If you're interested, check out my own comment on the situation.

Nice blogging and keep up the good work.