Despite massive election spending by the upper classes of Iran, and likely covert interference by the US Government and other Western governments and their regional lackeys, the people’s candidate, Mahmoud Ahmadinejad, has been elected Iran’s President. The course of his rise to power, as well as his background, viewpoints, and proposed policies, are so reminiscent of those of Venezuela’s Hugo Chavez that the similarity cannot be accounted for simply by charging Ahmadinejad with populism, a demonstrably false charge that has all too often been leveled against President Chavez by his class enemies.

The similarity to Chavez reaches uncanny proportions. Here is a quote from Ahmadinejad, which is something Chavez might have said: "The country's biggest capital today is the oil industry and our oil reserves … The atmosphere ruling over our deals, production and exports is not clear. We should clarify it … I will cut the hands off the mafias of powers and factions who have a grasp on our oil, I stake my life on this ... People must see their share of oil money in their daily lives." Iran’s Oil Minister Bijan Zanganeh, as well as OPEC Governor Hossein Kazempour Ardebili openly supported Ahmadinejad's opponent in the second round of the election. It is expected that they will both be removed from their posts once Ahmadinejad assumes the Presidency in August.

The way I see it, progressives need to attend to two points:

First, if Ahmadinejad’s actual policies during the first few months of his presidency confirm the image of him as a progressive, we must not neglect the task of supporting him, meanwhile not neglecting the equally important task of redoubling our efforts to support Chavez.

Second, Ahmadinejad’s election may alter the entire dynamic and significance of Iran’s domestic and international policies. Domestically, it may inject new energy into the popular character of the Iranian Revolution. Internationally, as well as regionally, it would be an example of what true home-grown democracy looks like in the Middle East, as opposed to US-imposed “democracy” at the point of a gun meant only to serve US interests.

The US Government and its accomplices will doubtless continue to do all in their power to undermine any progress in Iran and Venezuela. Their efforts in Venezuela have so far been fruitless, and the Bolivarian Revolution appears to have struck deep and unshakeable roots. Let us hope their criminal intentions will be equally futile in the case of Iran. 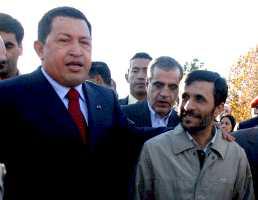 Nice piece Al! There seems to be a new reality in my homeland. A huge majority of my compatriots decided to vote for Ahmadinejad, because they saw in him something that we failed to see. By 'we' I mean the middle-class 'intellectual' type. All we saw was an unattractive guy with a bad suit and worse haircut. Back home, what my compatriots saw in him was something totally different. They saw someone who really cares for their plight. They saw a mirror image of themselves. Lets face it, the lower class does not care about democracy and all this shebang. They want someone who cares about their dire situation. Now we can put them down and say they're a bunch of uneducated good for nothings who have ruined our grand plans for a democratic country. They will turn back and tell us take that democracy and shove it! The divide between us and them is enormous. They have chosen Ahmadinejad and whether we like it or not, we must accept the fact. The people have spoken!

Thanks for your comment, Moh'd. I confess to a similar failing. As comfortable middle-class intellectual types sitting comfortably at our computer keyboards, we often tend to forget that democracy is about social progress and change. We tend to have a reified concept of democracy as a cut and dried ideal. We assign to the people the task of striving for that ideal. But the people know better. They know that democracy is about improving the people's economic, social, and cultural circumstances. We, the "progressive intelligentsia," have two options. We should either support the people, or stay the heck out of their way!

The depth of the gulf that separates the upper classes from the lower ones was never so well illustrated as in Ahmadinejad's response to concerns that he would enforce Islamic dress restrictions. He said: "The country's true problem is employment and housing, not what to wear."

Very good article Al! Also, as Al said, Moh'd you have a very good point. Democracy, just for the sake of democracy, has no meaning.

With all due respect why must we lend our support to Chavez?

What a wonderful site you have the comments appear to be intelligently excercised and fruitful, since each adds to your 'white paper' essay's quality, I am just stepping into your light and learning here!

I live in venezuela and I do not belive the Bolivarian Revolution has brought anything good for my country. Everyday more people suffer and become poorer. Chavez's dream is to transform the country into an other Cuba. Cuba is not the sea of happines that Chavez says it is, why do you think cubans risk theirs lives trying to reach florida?